Time Magazine Selects Mass Murderer As Person Of The Year 2012

Time Magazine has selected a mass murderer as Person of the Year for 2012:

When drones fly children die, and the American Sheeple who do nothing to stop it are as guilty of murder as their “elected” leaders. 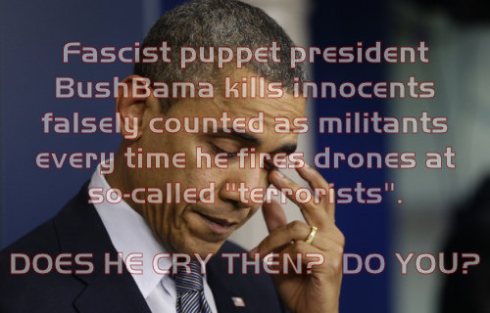 After the tragedy in Newtown CT, our fascist-controlled corporate media has the mush-minded American Sheeple once again demanding they be allowed to trade liberty for security in the form of more domestic gun control.

Well why just guns? And why just domestically?

Like Dubya before him, around the globe our fascist puppet president and Nobel Peace Prize winner Barack Obama kills innocent children and other people falsely counted as “militants” every time he fires drones at so-called “terrorists”.

Does he cry then? Do you?

Gun control? Let’s make that weapons control. And let’s start by disarming our war-mongering corporate fascist police state and defanging our out-of-control military/intelligence/security serpent before we disarm ourselves.